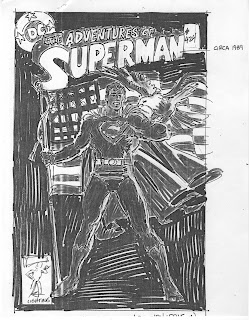 This was where I started on the cover to my first Superman cover after John Byrne's Man of Steel reboot in 1986. I only have this photocopy of the color sketch I did for Adventures of Superman#424. I wanted this to feel like a return to greatness, and show a powerful and patriotic character, reflecting Superman's midwestern upbringing. It was TOO much, according to Andy Helfer, the editor, and it was suggested that the stars and stripes be implied, rather than having the actual flag in there. It was a good call, as it uncluttered the image. 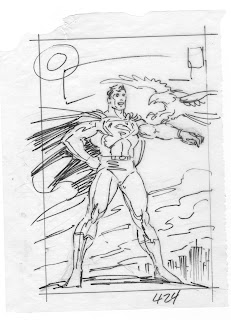 I eliminated the flag, and did this as a revision. 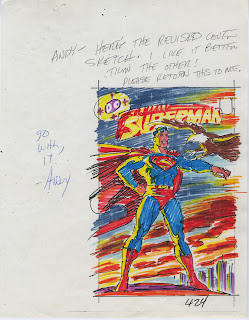 I colored a photocopy, to indicate the stars and stripes, and also because I begged and whined for DC to let me paint the cover. I took some inspiration from the great WW2 era patriotic Superman covers. Andy signed off on this, and I was given the go-ahead. 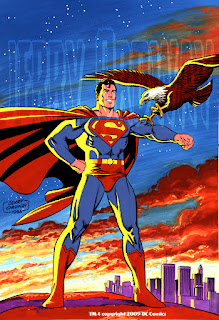 The cover was done with the line art being photographed, then the image was transferred to drawing paper using the blueline process, with a clear film of the black line art as an overlay the exact size as the blueline . This allows the color work to be painted on the board in gouache, an opaque paint medium, while still maintaining the crisp 100% black line art of the drawing on top. In reproducing painted color comic work before computers, even if you colored with transparent watercolor, the final product would not have crisp black rendering lines without separating that line art on an overlay.

Superman is trademark and copyright 2013 by DC Entertainment, used for promotional purpose

Posted by OkayComics at 1:32 AM

I was rather fond of that cover/issue. Got mine signed by you. =)

Spectacular. Love the text describing the process. I can't hardly understand the final steps with the blueline and the gouache because I'm not english nor artist but sounds quite well. ;-)

Wow Jerry this is fantastic I absolutly love this cover. I had it pinned to my wall as a kid.

Wow Jerry this is fantastic I absolutly love this cover. I had it pinned to my wall as a kid.

My favourite writer/artist John Byrne was on Man of Steel, Superman and Action Comics and I was curious as to how you would do on Adventures of Superman. Safe to say, you were amazing and I became a full fledged Ordway fan after the first 3 or 4 issues

I have that issue in Spanish! I really love that cover :)

You guys eliminate it real unproblematic for all the folks out there. free wordpress themes