Update: Messenger #23 and Proton #1 are now out of print. They have been reprinted together in a single issue, "Proton Part 1."

I've just published a new combination of comic book and sketchbook, titled "The Messenger" after a hiatus. My previous self-publishing efforts (through my imprint "Okay Comics") have been booklet sized, and and more modest efforts. This publication is 40 pages (36 interior plus color covers) and comic book sized, approximately 6 1/2"x 10". My goal is to adhere to a quarterly schedule, and here's where I need help! I need you to buy and read it, which in turn will put the pressure back on me, to create new content for the publication. It's a win-win scenario :) 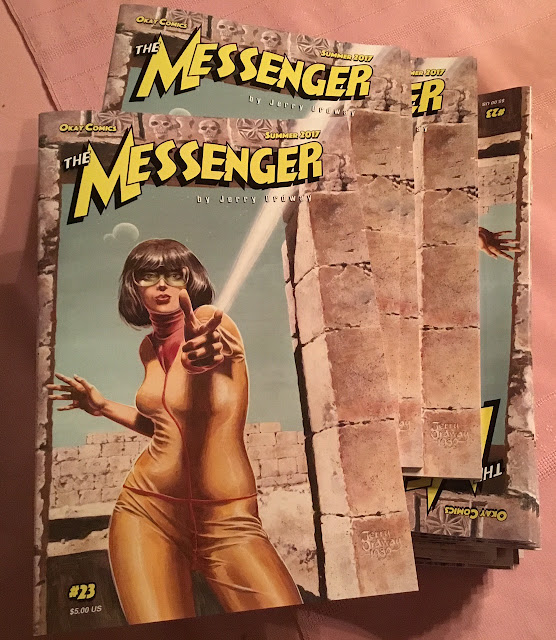 A little about the contents:

There's a 10 page lead story featuring a creation of mine called "Proton" that has been gestating for an awful long time! I first published the character in my fanzine "Okay Comix" in the early 1970's, and wrote and drew another chapter in 1978 that remains unpublished. In the years since, I have refined and re-thought the concept, almost drawing it for Image in the 1990's. Now, I am committed to finally getting it launched, though in smaller increments, as I still need to pay the bills by drawing custom art for fans.

Speaking of custom art, the remainder of the issue is filled with the many custom commissions I drew in 2013! I often post the digital images on Twitter or Facebook, but they're printed in "The Messenger" #23 for the first time anywhere!


These prices apply to domestic US shipping only. If you want a comic shipped internationally, contact me at ordwayweb@gmail.com . Same applies for bulk orders, US or international.