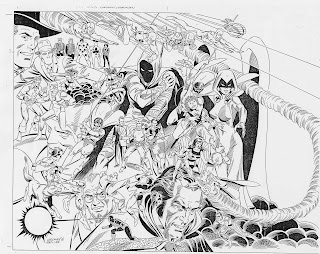 This piece was done for the 1980's Who's Who in the DC Universe, published by and TM and copyright DC Comics 2007, featuring a slew of DC characters with names starting with the letter "R". It was inked by my pal Mike Machlan, (who I shared a studio with at the time) and then rejected by DC editorial because I broke their format of having figures in a real space, relating to each other size-wise instead of collage-like, as I did them here. Artist Ernie Colon did a quick substitute, and that's what was printed. And hilariously, a few issues later they started doing collage type layouts themselves. Too late for this piece though. Well, that's showbiz folks. Enjoy! Best, JER
Posted by OkayComics at 9:50 PM 5 comments: