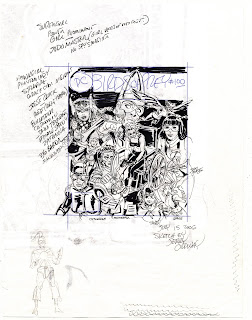 Hey, this was a small layout, done for editor Mike Carlin's approval, back when I did a bunch of Birds of Prey covers. Mike was always easy to work with on these things, and this cover run I did remains a favorite of mine. Note the small figure of Judo Master, on the corner of the sketch, done by me to help figure out the way the costume would work on the female version of Judo Master. As Carlin was most always on schedule, and rarely missed getting these covers done in time for Diamond's solicitations, I sometimes didn't have interior art as reference for the cover images. I probably had just the list of characters to include, and most had appeared somewhere previously, except maybe the lady Judo Master.
For comparison, the finished cover is posted below. 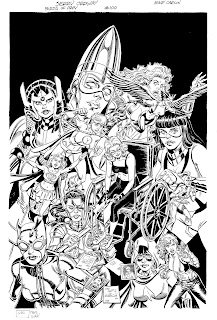 As you see, some elements are different on the final art, depending on the editor's direction or even my own desire to sneak more characters onto the cover. I don't recall which reason applied here. Jer

Posted by OkayComics at 7:54 PM

I was gonna say, if this was the "introducing a new Batgirl!" cover that I lightboxed for you, I'd demand a cut of the profits.

Ha! I don't like threats from "the help."
I don't think the cover you mentioned even HAD a sketch, did it? I think you transferred the original comic cover to the board, and I changed it up to the editor's satisfaction. And then, sadly, the printed cover had Batgirl totally blacked out. That does it, I am going to post that one!